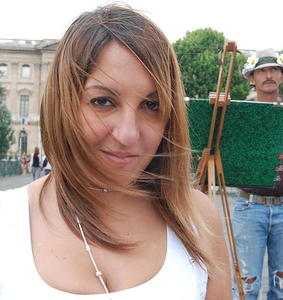 The young Franco-Israeli artist Elodie Abergel has been part of the “contextual art” movement for several years, coupling her artistic work with her associative commitment to “Zellige Paris-Jerusalem”, where she is both the founder and coordinator. After her studies in Fine Arts in Nantes, she moved to Jerusalem to pursue her work on what she calls the "Territories of Sharing" (“Territoires de Partages”)*.

Through her artistic vision and works, she has developed the concept of “art of the present moment”, offering up a humanistic yet poetic and critical view of politics in the Middle East. She identifies herself as a committed activist and sees this land as an open workshop. By immersing herself in the heart of the Israeli and Palestinian culture, she has developed an art which is participatory and engaging.

The focal point of her art is the territory she works within, the borders of which house her energy, whether they are visible or not. To convey this focus to her audience, she uses materials found in her surroundings, transforming them through different mediums (photography, installations, video, performance...) as a function of her expression.
In her work, she also focuses on "repetition" to highlight the absurdity of the Israeli-Palestinian conflict.

The word “Capernaum” comes from the Hebrew “Kfar Nahum”, which literally means village of consolation or reconciliation.

In biblical tradition, the town of Capernaum was the scene of great tumult.

Jerusalem, where the artist has lived for the last eight years, represents for her both a village of consolation and reconciliation, and a teeming, tumultuous source of inspiration, astonishment and experimentation.

Under the title “Capernaum”, the artist has gathered together works whose aestheticism is suggestive of accumulations of objects, photos, newspapers, flags, etc. to which she at times gives order, but at others mixes, mingles and even mangles in her personal “washing machine”.

The artist plays on this disorder as if to de-dramatize a situation which she sees as totally “topsy-turvy”. There is a distinctly playful aspect to these works. A game in which she invites the passer-by to become the initially unwitting and puzzled actor: the costume game (birds of a feather…), the game of telling looks (United Nations), the advertising game (Made in Holy Land), the hop-scotch street game (Peace Zone), the imitation game (doing one’s dirty washing in public) and finally the stool-pigeon game (don’t be gulled!).

In these works, she also throws up derisively humorous parallels between the “outrageous” behavior of one side and the other, pitting them back to back, aligning them side by side, and even putting them face to face with their responsibilities.

Her critical, humane but ironic take on Jerusalem won’t fail to involve the spectator in an entertaining and off-beat experience of this “world city” at the heart of the Israeli-Palestinian conflict.

Over the years, the artist collected photos of a multi-facetted Jerusalem with which she has now created more than 80 original Rubik’s CubesÒ. She then invited inhabitants to puzzle them out (video).

The result testifies to the complexity of the situation and the artist’s desire to share her amused but critical vision of Jerusalem.

“Birds of a feather”

Whereas the global trend in dress codes is towards uniformity, here in Jerusalem each and every one makes no secret of their faith and religious identity.

The artist has gathered life-size photos of garb worn by the inhabitants, mingling the modern with the traditionally religious, Orthodox with other Christians and Jews and Muslims of all hues, so as to uncloak the hitherto cloaked, anonymous silhouettes whose shadows cast a pall across the city.