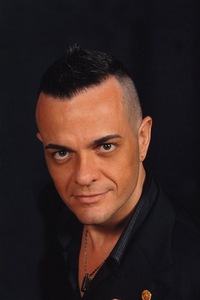 GD was born in Milan, to an Italian mother and a Dutch father. He's teenager when he reveals a character that can be defined as "outside the box" and a particular observation skill of the reality that surrounds him, for him never obvious. Eclectic, intuitive, ready to catch the smallest detail. He continued attendance in school going through studies in accounting and computer science, but with a critical spirit and a growing desire to "see farther." Much of his culture was acquired and completed as a self-taught, as a curious knowledge. The young George is not a rebel, he is rather a person who is not satisfied to walk the street already mapped out. At age 15, while most of his peers spend their time between football games and the first video games, GD began to cultivate an entirely unique passion: the legerdemain and illusion. He then enrolled at the Circle of Magic Piero Pozzi in Milan and at I.B.M. (The International Brotherhood of Magicians) and gave a new direction to his life. The strong attitude towards this artistic expression led him to tread the boards and to successfully carry out show activities for many years (from 1988 until 2010). He is perfectionist, both at work and in daily life, scrupulous and careful, guided by intuition and a vision that few people have.
His main engine, what he makes tough in research and effective in contact with the public, is the desire to see wonder in the eyes of others. Exactly in line with this vocation, after having represented on stage amazement, GD turned his strong inclination to produce several inventions, arising from his always think "beyond". Patents and innovation ideas led him in 2009 to the creation of a restaurant from the original formula, intended as a place of encountering and exchanging of real positive human energy.
Despite this new activity is still giving him great satisfaction and commitment, he can't force his creativity in any specific place and during these years another great passion borns: photography. He does it in his own style, trying to grasp what is not under the eyes of all and then it can surprising.
Through a common thread, that always distinguishes his life and his career choices, we can also understand the origin of his art: the images want to suggest that reality always has a side less obvious, sometimes magical, something that our haste usually neglected, but which can be quite charming... As the unexpected.

"My point of view" is a series of photographs which capture a precise detail, a fragment of reality that our eyes usually tend not to look at closely, because of their natural ability to grasp a collection of things. Here instead, the eye of the lens captures and returns to the human eye those parts often rapt in fascination. These details, extrapolated from the collection to which they belong, take on a life and characteristic all of their own. It's in the eye of the beholder, the free and dreamy interpretation of these figures. The name of each of them, or the meter by which each photograph was taken, is meant to symbolize the elusiveness of representation: you could discover in these photographs the circumference of the earth, but not the precise point where the object was immortalized. It's exactly the lack of context which accompanies the images that amplifies their efficacy, offering the viewer an emotion quite similar to that caused by a sleight of hand: one captures the extraordinary effect, but not the trick. Leaving intact that part of mystery whose task it is to fascinate us as human beings.
The representation proposed by George Donders is therefore something that does not want to belong to the concrete, but rather unleash the free flight of imagination.