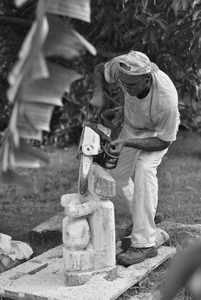 Alex BOUCAUD is a self-taught artist who has just expose to Nainsouta Remy en Pointe-à-Pitre, in early February, 2012, fifty sculptures, fruits of labor of the last three years. Unlike Haitian sculptors not working iron, although however, as the artists of the Grand'rue of Port-au-Prince, he is also adept at the art of recovery. Giving a second life to trees felled by service roadworks Sainte-Anne.
It's sometimes funny universe, sometimes disturbing a brown untamed we book with totem poles and horrific warriors farmhouse carved into the wood with a chainsaw. According to a technique of "wild", refusing mallets, chisels and other tools of a taught and codified practice. A contemporary German artist Georg BASELITZ just presented at the Modern Art Museum in Paris, using the same technique, to the actions of an art, said "first", which Gauguin had sucked his side. The handling of the saw Alex BOUCAUD allows to shape, extremely rapidly, to an imaginary that inhabits it. While printing in the flesh wood restrained violence, a violence that echoes the one that had to suffer his distant ancestors. Track given the saw blade, combat witnesses which the creative artist engaged with matter is sometimes visible. Once cut, the wood was then carefully sanded, smoothed, sometimes tinted and shiny with wax, to give the appearance of skin so smooth they call sensually caress. However, the resistance elements to this "smoothed" -embranchements, nodules, roughness of bark cracks and fissures- are not only preserved, but even enhanced. As all signs of this vital impulse, this eroticism that drives deep elements of nature and to which the artist will associate thick lips, exorbitées orbits, but nipples, women slots and phallus. In a combination of curves and bends, sometimes depressed sometimes bump, reflecting suggestive movements of the body inhabited by desire. Bodies that, under the leadership of the "Spirit" of Gwo ka, are like possessed by formerly forbidden erotic dances.
The Gwo ka, several works which refer, expresses the desire for the artist to find true inspiration in Africa. And specifically in African sculpture of certain populations, such as Lobi, were never submitted. These works express a desire to return, beyond acculturation suffered and moral constraints with a worldview in which men lived according to the laws of nature. Thus, if the interest of the artist is doing almost exclusively on the representation of the human, the animal world remains close to him. This is evident in sculptures such as "Kakos" (a monkey with acrobatic postures), "Bamboula" or "Hearthquaker" which represent both kinds of devils. But humans can also humorously be animalized, as is the case with "Lapoul". This is to make fun of a fréquente- attitude "to the chicken" - which is to escape an unpleasant reality instead of confronting it. -any Derision as autodérision- is a way for some people facing a world that is hostile, to distance with it. What was initially a survival posture becomes a critical weapon that allows its user to free, through laughter. The sculpture "Nostra Danus," subtitled "the eye of the poet prophesies" gives the most perfect illustration. What is represented is also causing the pun referred to by the title. A character, wearing rings and slave chains, and whose body is like split into two parts, rests on the ground on all four limbs. In an acrobatic contortion spilled face, he seems to want to see his crotch, while on land between its four members stands a phallus.
If the sculptures Alex BOUCAUD are figurative, they are away from the realistic, however, and openly displayed an artistic intention through real work on volume, shape and material. The carved faces, by exaggerating their physiognomy traits reminiscent of caricature, more a matter of the grotesque mas that of imitation. The characters are also frequently androgynous male and female at a time. As are the totems, which -such of the Sacred Wood seem charged with a spiritual function, that celebrate EROS and fertility. The approach of Alex BOUCAUD, like those of Louis LATCHEZ and Helenon Martinique, thus opens up against a cultural reaction to a Western approach favored the intellectual approach to the detriment of the sensory. To illustrate this approach, Alex BOUCAUD offers his "Origin of the World," a woman's pelvis in which gender is represented by a long dark tear. A work in the round, entitled "You and moa, a great story," on which is engraved on the other side, a male. But a work that keeps all its ambiguity and that can be interpreted as much as a promise of happiness as the trace of the original rape on a slave ship, and begat a whole people. It is this ambiguity that gives such a work his enigmatic character, quality, according to the philosopher and theorist ADORNO is the nature of art. A contemporary art hybrid nature, Afro-Caribbean, where Alex BOUCAUD agrees personally, this exhibition contributing to enrich a reflection that now concerns the future of post-colonial societies.
March 8, 2012.

***** GRAND INTERNATIONAL COMPETITION OF CONTEMPORARY ARTS OF THE EUROPEAN INSTITUTE OF CONTEMPORARY ART: ART ACHIEVEMENT AWARD
(Artistic Achievement Award for his contribution to the radiation of Art at the European scale). Toulon, 2015

The last exhibition (exposure) of Al's sculptures ' which took place in the center Rémy Nainsouta from 17 till 25 October 2008 was worth seeing. He (it) is interesting to see how this self-taught artist arrests (dreads) various wood of ours island of Guadeloupe to offer us a universe which looks like us. Tree trunks of diverse gasolines(essences), roots of all kinds, drink floated got back here and there, inspire from the beginning Alex in his (her, its) sculptural work. He (it) chooses them during meetings, in ballad. The wooden pieces speak to him (her) instinctively from this meeting and are sculptured in the chain saw. The chain saw which destroys (annuls), cuts, saws, prunes, massacres, kill becomes here, instrument of Creation.
We meet ourselves in front of masks flattened and hollowed out in high relief, of an important thickness. Masks in the surrealist speeds(looks) having expressions Negros and forms round off, privileged by the sculptor, sending back(dismissing) to us to the African masks and to the carnival of the Antilles. Masks of ourselves! Masks which show the other thing (matter) than the outside but indeed the meanders of our personalities, the complexity of the interiority of our beings, us, West Indian, in the light of these hollows cut with depth offering surprising contrasts. These masks also call back (remind) Caesar's (César) "compression ". We thus observe this mixture enter surrealism, africanité and Caesar's (César) sculpture: a work half-blood.
Another part (party) of the production of the artist concerns the face (figure). It is about sculptures in round-bump representing faces this time in three dimensions to the totemic aspect. We find the same described characteristics higher without the effect of compression but in forms rather lengthened(stretched out) with sorts(species) of trickles sculptured in wood, prominences, exgrowths or protuberances making reference to the expansion (cf "expansions" of Caesar(César)). Sometimes the artist plays on oppositions: rough / smooth by letting the bark of the tree speak to us in a way about expressionist.
The third part(party) of the work of Alex BOUCAUD is a reflection on the human body treated(handled) in volume or in bas-relief: fragments of bodies, characters in its entirety sometimes sending back(dismissing) to the ancestral statuary of Africa (Dogon) or funnier calling back(reminding) the "RAW"("GROSS") art or the work of Gaston Chaissac. The artist investigates the evocation of the movement through the biguidi, the Creole word meaning the unstable balance, or then his (her) opposite: the statics. Always in a strain and a retreat (withdrawal) of the material (subject), sometimes going to the évidement, these sculptures offer a new glance on the treatment of the skin. Gasolines(essences) of clear or dark wood and diverse skate participate in this reflection and propose us a multiplicity of answers (quite smooth or rough and smooth or then contrasted in tints of skate used).
It happens that certain sculptures propose a double reading, to certain faces(figures) which could offer to the glance a piece of bodies often treated(handled) in a more abstract way.

Al ' is in the main line of the "Negros with talent " whom are his(her) predecessors: Télémaque FLABERNOT, Félix DESFONTAINES, Armand BAPTISTE or Roger AREKIAN, Guadelupian sculptors.

Gilles GIRARD, alumnus of the school of the LOUVRE, on October 27th, 2008

Alex Boucaud mark his time by the singularity of his sculptural approach.
It was during his wanderings initiation and probing it flushes trunks, driftwood and other diverse roots that will cause his creations.
He spontaneously deflower every section of wood to extract the quintessence.
His plays cultivate excessive deformations. They revisit attitudes and emotional or physical trends such as "Bigidi".
They mix and crossbreed surrealism and totemic figures in an apparent hardiness and blatant insolence.
Its sculpted faces, its relief masks carved hollow, her entire characters, multiple or fragmented, multi-dimensional, in the round or hollow, of compressed or elongated appearance, rough or smooth, with varied and contrasting patina we deliver expressionist art that explores the multiple universes of Guadeloupean Creole identity, an art full of primitivism and sometimes syncretism foundation of Caribbean cultural roots.
Audrey LIMON
"Bigidi" (in Creole unstable equilibrium)