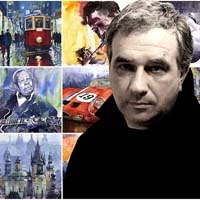 Born in 1961 in Kiev, Ukraine, Yuri Shevchuk attended the Kiev Art School and later the prestigious Kiev Architectural Academy. Yuriy has adopted the practice of recording his own experiences in his artworks: his three passions, painting, jazz and historical cars have become the focus of his paintings. Since 1993 Shevchuk has been living in the city of Prague, which he depicts in many of his paintings and also where he exhibits his work widely. He has been described as an accomplished master, full of artistic and intellectual energy. Bewitched with jazz music he skillfully and rapidly sketches the cool and charming figures of musicians in action, showing the positive mood of jazz and the stunning spiritual intensity of this bright magical world. His lively and spontaneous paintings expertly translate the atmosphere and verve of the music, using dripping, seeping paints and pastels. Another part of his interests is retro cars. He does not paint cars as such, but tries to depict his emotional perception of retro style. So, the observer can feel spirit of the past on his works. Shevchuk, an associate member of the Pastels Society of America, has participated in numerous exhibitions and his work is held in collections all over the world. The clarity, harmony, the refined palette of colour and line attract sophisticated art and music lovers worldwide. In the presence of Yuriy’s paintings one can almost hear the blues, feel the beguiling emotions and impassioned feelings of the musicians translated through the artist; such intoxication supports the belief that Yuriy Shevchuk is undoubtedly among the leading contemporary artists exhibiting widely in the Czech Republic today.