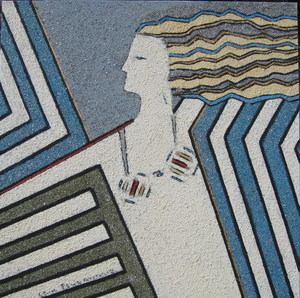 He has been brought up in Brussels, a unique melting pot of two cultures (Latin and Germanic). He was the son and pupil of the expressionist painter, Louis Pevernagie (1904–1970). The artist spent his youth at the foot of the legendary Manneken Pis, symbol of this bilingual town. He has been infused by a lively, surrealistic world, as it has been described by Michel de Ghelderode. After expanding his knowledge of the Anglo-Saxon and Germanic cultural heritage, he became Master in Germanic Philology at the Free University of Brussels (1961). He traveled worldwide, took a postgraduate degree at Cambridge University (UK) and became a Professor at Erasmus University. As he has always been interested in communication and international relations, he founded a social and cultural club in 1973: “Recreative International Centre” or “RIC”. For that purpose he acquired two boats in Brussels Port : “Ric’s River Boat” and “Ric’s Art Boat”. This gave him the opportunity to meet interesting characters, like Claude Lelouche, Atom Egoyan, Roy Lichtenstein, Hugo Claus etc. He became a Member and Associated Academician of Accademia Internazionale del Verbano di Lettere, Arti, Scienze