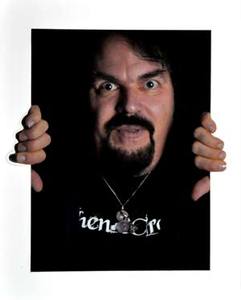 Yo-Xarek Wolter first came to public notice in 1982 in Lausanne, Switzerland, where as a pavement artist he produced large-scale works which already demonstrated his use of symbols and his need to communicate by means of natural elements.

Trained as a decorator he was unable to follow this career for long; a serious illness forced him to reconsider his life. He therefore immersed himself completely in social work as a care helper for elderly or handicapped people in Lausanne and then in Basel, where he resurfaced in the art world when a group exhibition gave him an opportunity to show his pictures. That was the beginning of his career.

Without ever stopping painting and exhibiting, Yo-Xarek worked for 14 years in health care, returned to decoration for a while and also operated a cinema before going back to French Switzerland. There in 1997 he turned professional and held two successful exhibitions in Berne.
He was very active on and around the Riviera Vaudoise. In 2000, he created the Association Romande pour la Valorisation des Arts (ARVA) of which he held the presidency until the end of 2007, and is now honorary president. This association aims to facilitate contacts between artists and to promote the sharing of their artistic experimentation. He is also a member of the Académie Européenne des Arts (AEA) and was awarded a prize by the Académie Parisienne Arts-Sciences-Lettres.

His friendship with the Swiss painter Ernst Fuchs enabled him to move towards the abstract and in 2003 he created what he called CD-Art by incorporating broken pieces of CD disk or glass into abstract compositions.
His vision and his techniques are in a state of constant evolution. Oils are his favourite medium, but he nevertheless enjoys letting himself be guided by his materials: the surreal makes way for the abstract, then blends with the glitter of CDs and glass, sand and acrylic paint.

He holds exhibitions in Galleries not only in Switzerland but also in France, Germany and Austria; prizes and awards received particularly in France have encouraged him in this direction. He enjoys working in public at art shows and demonstrations.
Yo-Xarek is an artist of the new energy; his original creations constantly invite us to escape, to dream, to take flight, to see the world differently. His primary interest now lies in abstract compositions made up of a mixture of different materials into which are incorporated broken and shattered CDs, arranged in such a way that under suitable lighting a really striking effect is achieved. This fusion of the surrealist style with abstract composition presents him with new creative opportunities.

Interstellar space and dreams are the principal themes of his work and are aimed at opening new horizons and carrying the observer ever further into the world of the imagination.

Some of my Paintings