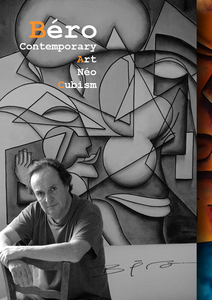 Photographer, writer, painter, filmmaker Alain BERAUD lived with his passions and his art works. Picture has always accompanied the life and career of the artist. Photography, original passion allowed him to capture people, things and civilizations through the many trips he makes for the cinema.
The words continue to sing in his mind and participate in these moments captured: a look, a smile, light beings and their part of shadow, all these pictures that seem to be forgotten in the bottom of a cardboard box and just waiting to be translated into paint. About the world of Art, he wrote a text entitled "Baby Doll'Art" an uncompromising portrait of a world that seems inaccessible to him.
His paintings, they reflect the breaks Alain Beraud agrees in his artistic life. the depth of soul, the sense of "beautiful" make this poet a talented painter who emerges with modesty guided by wisdom.
The color moods help to escape, to dream and freedom. Alain Beraud likes these subtle arrangements where his work shows color images, where the images themselves suggest smells, stories to make us travel beyond thoughts.
For him, creating comes in various forms and it goes from one to another of these arts he masters: he dives in photographic gray shades or the wealth of oil colors never dissociate poetic musicality of language.
Alain Beraud realized for years stories and movies on various topics or influence in Africa was present. From these trips he brought images of people living in the greatest simplicity, peoples he also photographed and he has kept it simple looks, sometimes dark but still worthy.
Alain Beraud like to stop the scenes of everyday life expressing contemporary way. Cubist painters between 1910 and 1950 have greatly influenced in his artistic choice.
His paintings then take another dimension. Our sensitivity is hopelessly attracted and the emotions become palpable ... just a look, warned or not to go in this world, and the artist has no additional evidence required to strengthen us in his talent.
2012 creation of the Double Art Movement, an alliance between painting, sculpture and light. Alain Beraud is behind the creation of this movement that is constantly pushing the boundaries of art to discover new horizons.