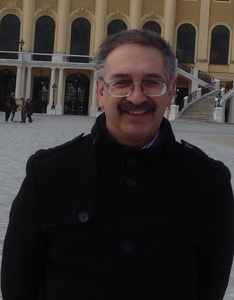 A few words from the artist:

"I have been a painter for as long as I can remember. I have kept pretty much all my paintings since then as they all have so much value to me. I am now realising that a painting does not live if it is not viewed and shared with people. Have a look and feel free to describe the feeling that each one creates in you
In the early 1970s, after joining medical school, his style was mainly figurative with the human body central to the œuvre; the body rarely portrayed whole but often fragmented or in pieces. Back then, most of his paintings were executed on paper, on wood or with oil painting. His style then evolved to reach abstract as Rachid aims to disturb the viewer with his paintings, which jumble items and sceneries to go beyond the clarity and the meaning and reach a deeper level of understanding.

While going through Rachid's paintings, we also fall in love with his country - Morocco - as the painter lets us uncover unsuspected beauties in some of the most remote areas of the country. History is similarly travelled with the painter who tells the story of his country form the old wise Morocco to the battle of independence.

“Streets on the city ”

“From red to Green ”

“Our earth and risks ”

Mouna is a great author and writer
All of the books she wrote are famous and magnificent
From Time to Time she get a laps to have fresh air in the garden in a calm square room .....

Many singers go to Dubai to participate on competitions like Arab idol or star academy
Here a Moroccan star at her room in a great hotel viewing.
Oil on canvas
90x70 cm

It's the tomb of the prophet
Oil on canvas
170x160 cm
Calligraphy .sourates of Koran for peace and tolerance
Abstract views for a large and modern view