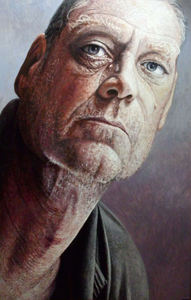 Wolfgang.......Biography
Wolfgang Widmoser was born in Munic on February 25th 1954.
Frequent excursions in the Alps tought him the wonderous and sometimes perilious conditions
of life. Fascinated by what he experienced he turned to Art as a form of exploration.
Since early childhood Wolfgang engaged in many artistic endeavors, Painting Music Architecture
and Philosophy to understand the meaning of the world.
After finishing high-school he went to study with Ernst Fuchs and Salvador Dali to become
familiar with old-master-techniques of painting and the intricacies of rendering dreams.
The many discussions he had with both masters opened his eyes and confirmed Wolfgangs
capacity to render his vision with utmost clarity.
With his Stillifes from the Seventies a world of objects and their relationships formed to
complex compositions. Studies about projective geometry led Wolfgang to introduce curved mirrors
that reflect the objects in surprising ways and led to the proposal of an – elegant Universe-.
Moving to Toscany in 1980 landscape and atmospheric effects crystallized to intense
Portraits of Nature – a theme he is still persecuting today.
Since 1984 Wolfgang kept visiting Bali where he is living today. In his search for the- abstract-
he discovered fotos of PapuaNewGuinee – Warriors with their fascinating bodypaints. A series of
largeformatted canvases of archetypal faces evolved. A Phanteon of personified elements to
combine the archaic with the futuristic.
In the 1990s the always latent passion for architecture broke to the surface.
His father, a gifted architect and painter himself always supported his son in his aspirations.
Inspired by tensile structures(Frei Otto) and lightweight engineering(Buckminster Fuller) Wolfgang
set out to design a sculptural and organic set of shapes - a unification of landscape and city.
Some of his ideas were realized in Indonesia and Europe.
Wolfgans motto – aestetic = ethic – points to a new version of the – Gesamtkunstwerk –
places where humans experience the Good, the True and the Beautiful.

“warrior of the peacock”

“warrior of the reef”

“warrior of the blue plate”

“warrior of the seaslug”