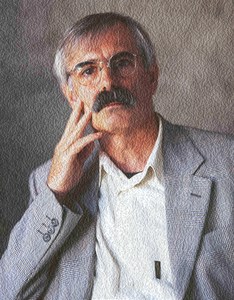 I start taking pictures in the early 70s and together with some friends we base a photographic club.
They were completely different from the current year, the innovations were few and this initiative was an immediate success.
We exhibited anywhere, any local became an exhibition. The photograph had a big spread, many photographed and developed the Juventus in makeshift, often in the bathroom of the house, seeing the image appear in red and low light in the darkness of the darkroom, was and still is for me a spell, seeing appearing on paper what I had seen in the viewfinder of my camera still gaves to me a feeling hard to explain, I have experienced the photo as the first step towards the world began to change.
In a photographic exhibition I met the photographer Gianni Borghesan and I started going to his studio.
Gianni Borghesan was an exceptional photographer, he didn’t like very much to talk of his photos, he speaks hardly never about photography, was discreet and austere, the appearance was of a very distinguished man, influential and with an acute irony, that little suited to his appearance, he was then about 65 years old, I was just over 20, his personality imposed me the use of “her”, with me he used “you”.
He did not like to teach the secrets of photography but I don’t know why he had with me a great availability.
By photographing everything that I liked I learned to follow, under his leadership, a theme, no more shots just to fill the rollers, hoping to capture a good photo but the mindset of storytelling through photography and, not surprisingly, photography it means writing with light.
The cut of the image, precise, essential, cutting everything that doesn’t serve to emphasize the subject, when he cut my pictures I remained almost hurt, he; it's not!
Sometimes he cut half image, he said; put a few things, three are too many and go close.
On 6 May 1976 the earthquake destroyed Friuli and changed it completely, not just the urban aspect, also changed the mentality of Friuli, to be honest I preferred the one before the earthquake.
After this event I move and having acquired a good technique I decided to make photography my work, I open a photo studio and start working in publishing, color photography began to spread and the color photos in publishing, as it was called then the large color slide format. On books and newspapers appeared increasingly color images replacing those in black and white but have the results required by cromista, figur disappeared now, was not a very simple thing.
After several years of work I decided to leave the profession, a difficult decision but that day helped me Gianni Borghesan, that was gone, I remembered one of his 20-year before sentence.
I’m a photographer by trade, he told me, and my father was a photographer too,but to taking picture you don’t need to be a photographer, my teacher of photography was one who sold cloth.
Encouraged by this phrase I left the profession, continuing to devote myself to photography, the one that appealed to me.
I would have liked to photograph as Gianni Borghesan, the balance of his photos, the cut, the light, put together a few elements, but each in its place and make a picture a masterpiece.
To get a good picture elements that compose it must all be in harmony with each other, but this in a scene lasts less than a second, sometimes a fraction of a second and in this short time we must be able to put on the negative "the moment ",the more that time is short the more the photo is of value, this is a feature that few photographers have, including famous ones.
Photography is with me for over 40 years, I tell through Juventus photography as times of Gianni Borghesan.

“Pep(per) Art” was born with the purpose of explaining the reading mechanism of “NUS-NOÛS” photographs and refers to Pop Art, artistic movement born in England in the 50s, whose most popular exponent was Andy Warhol, with his multiple images of marilyn. These images are congenial for the interpretation of the NUS-NOÛS” photographs.
The colored images on the right seems to represent human bodies or parts of them, in reality they are a pepper, but it’s the observer who wants to see them.
When we look at anything, even a situation, we observe it in an emotional way and this is why we often mislead ourselves.
The black and white picture on the left represents the same rotated object. In this position it does not have the same meaning as the colored images. But this lasts for a very short time, the time the time that the areas of the mind become aware of the deception.