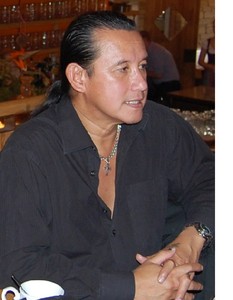 Winston Tragico was born in Cebu City, Philippines in 1959. His Mother was a Teacher and his Father was a Harbour Pilot. Tragico makes paintings and drawings. By exploring the concept of landscape in a nostalgic way, Tragico creates intense personal moments masterfully created by means of rules and omissions, acceptance and refusal, luring the viewer round and round in circles.
His paintings don’t reference recognisable form. The results are deconstructed to the extent that meaning is shifted and possible interpretation becomes multifaceted. By creating situations and breaking the passivity of the spectator, he investigates the dynamics of landscape, including the manipulation of its effects and the limits of spectacle based on our assumptions of what landscape means to us. Rather than presenting a factual reality, an illusion is fabricated to conjure the realms of our imagination.
His works are based on inspiring situations: visions that reflect a sensation of indisputability and serene contemplation, combined with subtle details of odd or eccentric, humoristic elements. By applying abstraction, he wants the viewer to become part of the art as a kind of added component. Art is entertainment: to be able to touch the work, as well as to interact with the work is important.
His works establish a link between the landscape’s reality and that imagined by its conceiver. These works focus on concrete questions that determine our existence. Winston Tragico currently lives and works in Bad Sachsa, Germany.
Winston Tragico completed 1975 as Draftsman at the Negros Oriental State University (before: EAST VISAYAN SCHOOL OF ARTS AND TRADES) in the Philippines. He painted Jackets, Pants, T-shirts, Cars, Buses, and Walls etc. in order to earn his Pocket Money.
Tragico studied Civil Engineering at the Silliman University in Dumaguete City, Philippines, but stopped it and travelled in January 1979 to Germany /Europe in Order to explore the World of famous Painters/Artist.
Studied 1986- 1990 in Hannover /Germany, completed “Remedial Therapist”.
- 1987 – 1989 Solo Exhibition thru Invitation in “Restaurant Schützeneck/Bad Sachsa, Germany”
- 1989- 2000 Solo Exhibition thru Invitation in “Hotel and Restaurant Lindenhof” in Bad Sachsa, Germany
- 1991 - Solo Exhibition thru Invitation in Town Hall / Invited by the Masonic Lodge , Osterode /Germany.
- 2004-2005 -Studied and Completed (Hamburg /Germany) ILS- Correspondence Course “Interior Designer”
- 2011- Solo Exhibition thru Invitation in the Bank “Stadtsparkasse Bad Sachsa/ Germany
- 2013 – “ Atelier-Vernissage “ Opened his own Atelier in Bad Sachsa, Germany
- 2014 – 2015 Solo Exhibition thru Invitation in “ Haus des Gastes” , Vital Park / Bad Sachsa/Germany
- 2015 -Artavita Online Art Competition awarded with “ Certificate of Excellence”, Santa Barbara, U.S.A
- 2015 – 30th Annual Chelsea International Fine Art Competition awarded with “Certificate :Honorable Mention” Agora Gallery, New York City, U.S.A
- 2015- 2016 -Solo Exhibition thru Invitation in the Bank“ Stadtsparkasse Bad Sachsa/ Germany”
- 2016- Exhibition thru Invitation “ OXFORD INTERNATIONAL ARTFAIR “in Oxford Town hall, Great Britain
- 2016 -Solo Open Air Exhibition /Atelier Tragico in Bad Sachsa, Germany

“Letter in The Bottle”