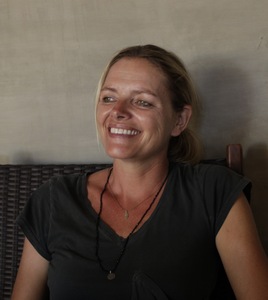 Dutch artist Irene Hoff currently resides in Bali, Indonesia; having lived and worked across South East Asia (Jakarta, Kuala Lumpur, Hong Kong, Ho Chi Minh City) over the past few years. These diverse cultures have influenced her artistic style and theme. Irene began her creative career as a graphic & product designer, and later decided to focus her energy on the creation of art. Irene’s work is lauded regionally, and has been presented in various solo exhibitions throughout Indonesia, Vietnam and Holland.

Irene’s art has an instant impact. The unique blends of modern and traditional culture take art lovers into a mystical world that often only exists in their imagination. There is a wealth of intricate detail in each picture that requires in depth study and often Irene will incorporate a clever surprise or angle that leaves the viewer with a feeling of wonder, mystery, laugher, excitement, longing to see more. It pulls you into a place you love to stay, a break out of the ordinary. Moreover, she challenges you to believe in your imaginary world and make it you own.

Vivid colors and a unique compilation of styles and visual elements, like pictures, cartoons, symbols, signs & words, are often the basis for Irene’s authentic collage-pop-art-kind-of-style. All the paintings are hand painted, using mixed media of acrylics, oil paints and paper prints. She loves to work with stencils, spray paint, pencils & texture.

“What does the fox say”