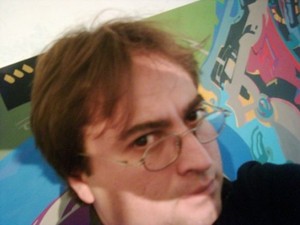 Follower of Zen philosophy and fine connoissour of Chan philosophical systems, of Tibet Buddhism and of Hinduism, Edi APOSTU builds his pictorial space on the archetypal structures of the Macro-univesal Cosmogony, popularizes an original artistic vision in which he grasps an Imago Mundi which he transfers from the phylosophical conception into the pictorial or metaphorical image, his art being a nondiscursive metaphysics, a hermeneutics achieved with the means which the fine art puts to the disposal of the signs.

Edi APOSTU transforms the Implacable Time into an infinite Spiral of neverending illusions in which the mortal soul is anchored and takes different forms, from the perennial transmigration to which he is subjected to, due to the discontinuity of conscience among different existences, fact due to the ignorance of the Ego.

In Edi APOSTU’ s art there are found the primordial elements of Cosmos, symbols and Universal archetypes, signs reasoning with different plans of the Creation, either visible or invisible, either angelic or terrifying. As a whole, his works are images which find echo in other visible or invisible zones of Creation, portals towards parallel worlds.

Being interested in the infinity of Time and in the Physical and Metaphysical space the artist, through harmonious joining of the flat forms with the 3D ones, decomposes temporary spaces in order to reconstruct them contortedly in non-temporal dimensions managing with magical skill to build unimaginable spaces and plans, revealing and offering to the spectator new visions on the infinite and perennial Creation.

The themes come from the philosophical system of the artist, who, not agreeing with the idea of metempsychosis, considers that the transmigration of soul cannot only take place from one level to the other (the physical level – the astral one and only on the Terrestrial level) but from one planetary system to the other, being possible that after death of the physical body the soul to rebirth in another physical body from another planet from the physical Universe, thus suggesting the concept of interplanetary transmigration.

In a world in which culture, in general, as well as art, in particular, become more and more infantile with the passing of time, Edi APOSTU offers to the seekers of original and highly qualitative fine art a new vision in the field, proposing to the public the holotropic painting, a type of painting in which the complementary – contrasting chromatics is chosen in such a way so to catch the eye of the spectator and to transpose it into states above the conscience.

Edi APOSTU challenges the spectator to explore new dimensions, beyond time and space, his painting being an opening to new virtual and sensatory horizons.

„The holotropic art is the art which is the result of transpersonal experiences and which can transpose the beholder into states of overconsciousness.

All my artistic creation, eiher painting, graphycs or poetry, is rich in symbols and universal archetypes. Even if most of my works are abstract, they transmit subtle messages and have as source of inspiration The Source, the Universal Source from which Information comes, information which materializes in the physical plan in my creations.

I consider my artistic achievements as a stage in the process of both artistic self-perfection but especially in the spiritual one, because creating them I raised existential and metaphysical problems to myself and I think that the inspiration the artist receives while giving birth to a work of art can become an answer, because the artistic creation cannot have, in my opinion, a strictly human origin.

Personally, I consider that the art is the most fascinating manifestation of the Divine creator at the terrestrial and physical level, through which there is made the connection between the limited-ephemeral human condition and the infinite-eternal Divine.“