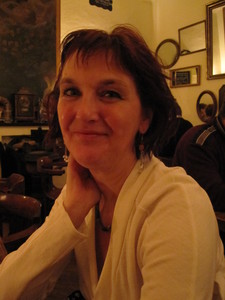 Marieke Russel was born as
Marie Danielle Helene Russel in Ede
(the Netherlands) on December 12, 1956.
She is the daughter of the painter and graphic
artist Charles Russel. In her early
childhood, the Russel family moved to the artist
village of Bergen aan Zee. Later on, the
Russels and their six children moved to
Kerkrade where father Charles taught arts and
crafts. Marieke’s artistic qualities were already
evident during her early childhood. The development of her talent was further stimulated by means of private tutoring by, for instance, Jacques Vonk, Frans Nols and Theo Lenaerts. She was a reserved child, who was engrossed in reading fairy tales, loved dance and theater and created her own dolls.

After her high school graduation she enrolled at the Stadsacademie Maastricht. She specialized in commercial drawing at the academy of arts. Her love for theater, however, prevailed. Her artistic talents were further developed at the Royal Conservatory in The Hague, where she studied pedagogy and passionately perfected her ballet dancing. Marieke’s versatility has no bounds: she crafted wooden theater dolls, made monumental tapestries, sculptures and furniture and is renowned for her illustrations and glass art. After running a successful ballet school, Marieke dedicated herself fully to the fine arts. She restored numerous historical objects commissioned by the Werkgroep Kleine Monumenten Stein (Project group Small Monuments Stein). Marieke Russel graduated as a gold- and silversmith in 2010. Nowadays, she is a gallery owner. In addition to her own work, other artists regularly exhibit at Galerie Marie as well. Galerie Marie has become an important cultural hallmark of the Maasland region. Like Marieke, the gallery is of a versatile nature. In addition to exhibits, the gallery often organizes concerts, theater productions and art classes.

“angel of the earth”