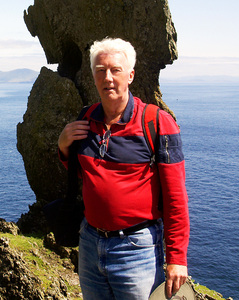 Before taking up painting seriously in various media (especially oils and pastels), Richard spent 40 years as a graphic designer, specialising in corporate branding and marketing graphics for clients including GlaxoWellcome, Woolwich, Thames Water, British Gas, NHS et al. He has now taken up his brush and reverted to memories of an early training at the original Croydon Art School in the '60's. He learned more from Ken Bates in Epsom Adult Education, before Ken (regrettably deceased) asked him to take a class. He has taught drawing and painting privately, whilst developing post impressionist drawing and painting. He likes to work en plein air when possible. He is influenced by light, colour and the telling a 'story' in a painting (or photograph). His work is also exhibited with the PainterStainers Fine Art Society, the Dorking Group of Artists and B Gallery, and is also published at www.saatchionline.com/profile/178864.
He won Bronze Frame in the 2015 international ArTTable Be Still competition with a watercolour still life.

I am gradually developing a style reminiscent of the Post Impressionists, Fauves and maybe a touch of Dada, which I call New Post Impressionism.
I still experiment with style but am heavily influenced by Van Gogh and Monet, Matisse and others of that period.
I work often in Oils, Pastel, sometimes in water-colour and acrylics.
I remain figurative (not figures, but representational) and do not much agree with the move toward conceptual art. After all, art has always been conceptual since the Church decreed story telling, but skill has always been a factor. Modern conceptual artists do not even need to draw, so where is the skill? What for instance does an unmade bed or a cow in aspic tell us? Art moves on it is true, but it still needs to be bought and displayed.

Shortly after visiting Arles in February 2015, I realised just how great was Van Gogh, especially with his instinctive understanding of whirls and vortices in his later work brush-marks. I have been developing the use of brush strokes as used by Monet, Pissarro and Van Gogh and am pushing the technique still further, hoping to surpass the masters in time. These strokes are highly emotive and descriptive of mood and form. They also allow a type of pointillist mixing that allows the use of colour and tonal perspective described by Leonardo da Vinci in his notes.

This was day one of watching how "Pete the Street" Brown approached his en plein air paintings which are produced very quickly.
Copying the technique took me toi this work which could do from some overpainting but essentially captures the time of day in this hot climate.

“The bridge at Arles”

Having discovered that Van Gogh's famous foot bridge was outside of Arles, I sat for a 6 hour session by the Rhone and produced this. It lacked colour when I got it home, so I overpainted it with colour invention (as did Van Gogh in his original work). This is the result which I think works well.

This was produced as a demonstration water-colour for students in an evening class. It amazed me when it won the Bronze Frame in the Be Still competition run by the International ArTTable in the USA. It never struck me as a great painting but these things are subjective and one described it as a Cezanne like painting. A real compliment!

Victoria posed for this pastel painting and commented after I drew this that 5 should place it in the portfolio. I have used the strokes of the pastel to describe the form and emphasis the colouring.

One of my earlier oil paintings, following a trip to Giverny to see Monet's house and garden. It is quite large and is framed in gold modern moulding.