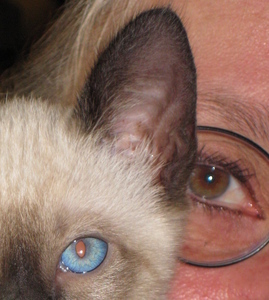 Born in Geneva, Switzerland of Romanian political refugees, Sanda Manuila experienced expatriation and isolation at a very early age. As a young adult she left her native country and moved to Northern California where she is currently living.

Over the years Manuila has learned how to become a citizen of the world, a stratus she also gained by studying art over many years and in different locations. She studied at the Ecole des Beaux Arts in Bordeaux, France, Atelier Bessil in Montpellier, France, and at the Cornish Institute of the Arts in Seattle, WA. More recently she has traveled to Italy to study at the Angel Academy in Florence and in Rome Artworks in Rome. Additionally she participated in an Artist Residency at Dacia Gallery in NYC.

Manuila has participated in many group exhibits, among which at the Napa Valley Museum in Yountville, CA, the Marin Moca in Novato, CA, Art Works Downtown in San Rafael, the Southern Nevada Museum of Modern Art in Las Vegas, NV as well as Dacia Gallery and First St. Gallery in NYC.

Sanda Manuila creates oil and pastel paintings, which are stylized representational images from which exude an allegorical quality. Her visual stories depict a state of mind in which the boundaries between dream and reality have become very fluid. Her purpose is to make art that depicts the challenging path of life, and what it entails to be a woman in an intimate, social, cultural and universal realm.

My oil and mixed media pastel and gouache paintings are stylized representational images from which exude an allegorical quality. They depict a state of mind in which the boundaries between dream and reality have become very fluid.

Oil on canvas, 24"30"
Seagull in disarray trapped in fire. A memory of the 2017 Northern California fires and a comment on global warming

Oil on canvas, 30"x24"
Monarch butterflies caught in fire. A memory of the Northern California fires and a comment on global warming, immigration, and the situation of the Dreamers

oil on canvas, 36"x24"
Crow trapped in fire
A memory of the 2017 Northern California fires and a comment on global warming

oil on canvas, 30"x24"
American Eagle drowning, a comment on the vulnerability of democracy, birds don't fly in water, a comment on global warming

My mixed media work of gouache and pastel on paper is loose. The process involves a slow addition of layers starting with gouache, and then going in with pastel, alternating back and forth with the two media. The application of paint and pastel is controlled but also gestural. I splatter with fan brushes, tooth brushes and scrape with a palette knife. As in my oil work, I seek depth and richness.

“The Sky cries in my lonely Heart”

A bird standing alone in the rain and in the cold.
I walk a lonely road, the only one that I have ever known. iI don't know where it goes, but it is home and I stand alone.

Pastel and gouache painting on paper. The portrait of a woman wrapped in butterfly wings.

“Of Love and Survival 1”

Pastel and gouache painting on watercolor paper, 19"x15"
A couple of crows struggling together for survival in a snow storm. A comment on global warming.

“Im-Migration Series: Self Portrait of an Immigrant”

Pastel and gouache painting on watercolor paper, 15"x19.5"
Self portrait as a monarch butterfly. A comment on immigration and the Dreamers.

Pastel and gouache painting on paper, 18"x15"
Small finch rapped in fire. A memory of the 2017 Northern California fires, a comment on global warming