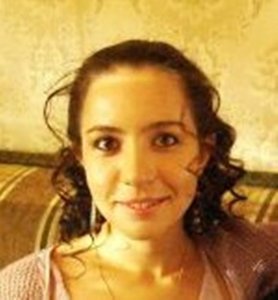 Ann Gubnitskaya was born in September 5, 1979, in the city of Chelyabinsk, in Russia.
Since early age Ann was good in drawing.
She studied at Children Art Studio (from 1986 to 1994), Chelyabinsk Art College (from 1994 to 1997). She has became a student of Saint-Petersburg Decorative Art and Design Academy since 1997 and graduated from it in 2003. A few years Ann worked as a designer in the printing industry in St.Petersburg.
She immigrated to Israel, in March 10, 2011 and arrived in Ra'anana.
Ann doesn`t work as a designer, but all this time she is painting.
At the age of 12 (in 1992) the girl had her first personal exhibition in Chelyabinsk.
Ann has had more than 25 exhibitions in Moscow, Saint-Petersburg, Chelyabinsk, Pskov since that time.
She was the participant of Regional welfare program of “New Names” under the leadership of Chelyabinsk Regional Government and Cultural Fund (1992-1997).
She took part in different International, Russian and Regional Youth Festivals of Art and has many diplomas, awards, prizes.
From 1997 to 2000 Ann participated in some festivals of children and youth creation of Jewish Communities of the Urals and Russia in Moscow.
In 1998 there was her exhibition on the 4-th international conference of graduates of the Institute of social and community workers in Saint-Petersburg.
From 1999 to 2010 there were Ann`s personal exhibitions at Jewish charity centers in Saint-Petersburg, Chelyabinsk, Pskov.
In October-December 2002, there was held a collective art exhibition, as a report on the results of a trip Art Students Hillel seminar to the Ukraine over Jewish places (cemeteries, synagogues, and towns).
In October 2004 Ann participated in the Festival of Contemporary Art in St. Petersburg Nabokov Museum. It was organized by student organization Hillel.
In December 2008, there was a personal exhibition at the House of Jewish Culture in St. Petersburg.
In December 2011Ann opened her first personal exhibition in Israel, in Ra'anana, as a new young jewish painter.
In March 2012, Ann participated in group exhibition "Woman's Look" at the Russian Center in Tel-Aviv.
In October 2012, an artist participated in the Festival of Arts in Old Jaffa, which was held at the gallery "Migdalor".
From 09.11.2012 to 01.06.2013 she also took part at the exhibition "Bird's-eye" in Tel Aviv.
In January of 2013 young master took part in the exhibition of the gallery "Mansohn House" project at Jaffa Museum of Antiquities, the exhibition was named "2012".
Her pictures are in private collections in different countries.
They decorate the offices and apartments in Russia, USA, Canada, UK, Israel, Poland, Finland and others.
In this Israel period Ann`s works are distinguished by color. They have become more bright, as the beautiful colorful nature of Israel and vivid life around.
The artist works in various techniques (oil, watercolor, graphics), in various genres (landscape, still life, portrait, picture story). Her works have magnetic properties and do not leave anyone indifferent.¬¬¬
As wrote in his gratitude letter Rabbi Yossie Goldman, Founding Director Hillels of Israel and FSU,
about Ann`s picture hanging at his office.
“So good to hear from you and learn that you are now in Israel. Welcome home! Your painting hangs in my Hebrew University Hillel office and I enjoy it every day.
Dear, Anna, thank you so much for the wonderful art you shared with us.
It`s beautiful. You are very talented and we appreciate your very special talent and art!
Thank you!”

“The pray in the Sinagogue.”

“Jewish tailor and his goat”

“The copy of Tutrumov "A rest bacchantes"”

“Simchat Torah at the Western Wall”

“Church of the Savior on Spilled Blood”

“The cape of Vasilyevsky Island”

“Jerusalem from the bird's-eye view”

“Simchat Torah at the Western Wall”

“the struggle between good and evil”

“Shabbat in the desert”