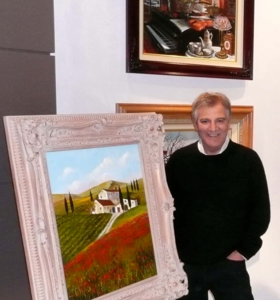 H. Hargrove, born Nicolo Sturiano in 1941 grew up in a small town just outside of Palermo, Italy. At the age of 23, he came to the United States with a degree in wine chemistry from the Wine Institute of Marsala excited to pursue his chosen profession.

Hired as a winemaker for a small vineyard in upstate New York, H. Hargrove's career soon changed direction when he discovered and fell in love with the American countryside. Literally awestruck by the beauty and the antiquity of the weathered barns and covered bridges, he began to paint. The owners of the winery were so impressed with his images that they asked him if he would like to create paintings to decorate the wine tasting room. Much to his delight the series of paintings depicting Monks in various stages of wine tasting became much more popular than the wine and the artist soon found himself in a studio in Greenwich Village, New York City.

The rest, as they say, is history.
H. Hargrove's accomplishments are many. His paintings are displayed in homes and businesses throughout the world. He today ranks as one of the country's most-collected and renowned living artists.
H. Hargrove was honored to create a commemorative painting for the centennial Olympic Games. "From Athens to Atlanta" is one of the artists most celebrated works. H. Hargrove was again honored to create a work celebrating the Women's World Cup Soccer tournament. "The World Is Watching" captured the spirit of this most historic event. The artist was asked to come to a special event at the state capital in New Jersey, where he presented the then Governor Christine Todd Whitman with a limited edition of the "World is Watching" to help celebrate the "kickoff" of the Women's World Cup Soccer Tournament.
H. Hargrove has been featured on television, radio and in magazines throughout the world. He has appeared on the NBC Today Show, FOX Television and local network and public television. Other highlights include a retrospective showing of his work at the historic Cincinnati Art Club where the artist and his celebrated guest, hall-of-fame basketball player Oscar Robertson raised thousands of dollars for inner city children.
The Children's Miracle Network benefited from a charitable appearance by H. Hargrove in New Orleans.
Additionally, H. Hargrove was honored by an invitation to our Nation's Capital by the United States Marines Corps in a special showing of his work at the Pentagon.

Referred to by some as a poet with a brush: by others, as a compelling visual storyteller H. Hargrove has captured the hearts of America for over twenty-five years.

An optimistic outlook permeates all H. Hargrove works, whether allegorical inventions, still lifes, country barns, imaginary scenes, seascapes, landscapes or other subjects. At heart, all of his paintings — regardless of their overt topics — revolve around and exalt and express an unshakable confidence in the essential goodness and strength of the human spirit.
“My passion is still life, but in all of my paintings I strive to tell a story,” said the artist. “I have been called a storyteller and a poet with a brush.”
By following his inspiration, the self-taught artist has enjoyed an exhilarating career journey. It began innocently and obscurely at a boutique vineyard in upstate New York, where Sturiano worked as a wine chemist, the trade he trained for in Marsala, Italy.
I hope you enjoy my portfolio.