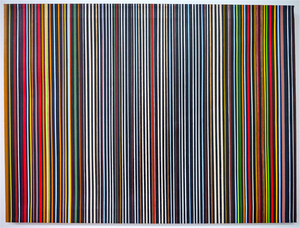 My artwork is a visual reflection of my surroundings and of the human spirit reflected in these surroundings. As such, I use both representational and abstract art for visual expression. I am probably influenced by the fact that as a scientist, painter and print maker, I lived and worked in other countries before settling in Illinois. My media include watercolors, pastels, drawings on drafting mylar, acrylics, embroidery thread on canvas and above all, printmaking.
Intaglio prints are my way of delving deeply into the subject of interest more intimately than I can with painting and drawing, because intaglio making slows down the creative process encouraging further development of ideas during redaction of the image. These images I make using both traditional and modern etching techniques; the traditional being woodcuts, copper plate intaglio and lithographs on stone; the more modern, being solar plate intaglios which can mimic all of the others. In addition, solar plate is a greener printmaking process than copper plate or stone since images are etched by light and developed by a few drops of water as opposed to traditional printmaking that require petrochemicals. The interaction of light with the solar plate is like another passion of mine, the science of the interaction of light with matter.
Indeed all art can be regarded as an interaction of light with matter, not just at the molecular level, but at the level of the mind's eye, describing " life in the visible spectrum".