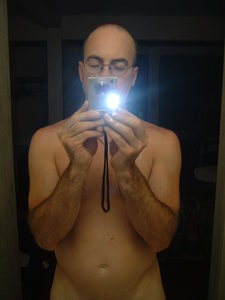 Todd Monaghan is a painter, collagist, writer who specializes in what Tony Solomon of the Andy Warhol foundation described as "spiritual surrealism". He has shown in various galleries in New York City and is part of academic, corporate and private collections both in the United States and abroad.

Todd Monaghan has no easel, he paints in an unconventional way, pinning his canvases to his studio walls then bringing them to the floor then back to the walls again and then the floor searching to see something new each time. Todd applies paint by flicking, spilling and dripping it. He is spontaneous in his movement welcoming chance and experimentation. The work is colorful and textural and has a sense of discovery. Mr. Monaghan creates multi-level immersive works that encourage the viewer to explore the parts as well as the overall whole of the works and their interplay.

By constantly reinventing the game of painting (i.e., flipping in various direction, using various conventional and unconventional materials), Mr. Monaghan seeks to uncover the story that exists within the paint. Like a sculpture uncovers the piece within the stone, Mr. Monaghan works to uncover the characters that exist within the paint. In this way, he approaches his work from a mystical/spiritual perspective with an emphasis on intuition.

Through his various studies of breath awareness in the martial arts, acting and yoga, Mr Monaghan realized that there was an energy that springs forth from Mother Nature herself. He realized that this energy, which exists outside the five senses, guides and informs the five senses. In his work, Mr. Monaghan strives to channel this life force by becoming an instrument for it.

Just as a story has a surface text and subtext, so do each and every one of Mr. Monaghan’s pictures. The basic images evolve so that, with each new viewing, underlying images “pop” from the paint. Each form takes on various images as one looks deeper and deeper, imbuing the picture with new meaning, just as the face in a rock or tree imbues in it the spirit of life itself.

Through this process Mr. Monaghan strives to create an exciting distillation of our political, spiritual and out-of-control pop culture colliding in the 21st Century.

This is an ever-evolving process.

The photograph of the artist was recently featured in the Exposure Award, a digital display at the Louvre on July 13th as part of the Art Photography Collection, The other works from from my recent black and white series and my Celestial Sky series.

Photograph of the artist recently featured in the Exposure Award, a digital display at the Louvre on July 13th as part of the Art Photography Collection.