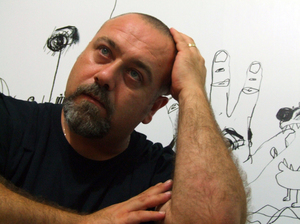 Born in England and of English and Greek-Cypriot descent, Tomblin now lives in Nicosia, Cyprus. A noted painter and Assistant Professor at the University of Nicosia, Cyprus, his art has received international exposure in Juried and invited exhibitions and in public and private collections worldwide including UK, USA, Cyprus, China, Belarus, Finland, Romania, Lebanon, Italy, Albania and Egypt.

• STEMPERANDO - BIENNALE INTERNAZIONALE DI OPERE D'ARTE SU CARTA
The sixth edition of the International Biennial of works of Art on paper that take places in three stages: Torino, Tirana, Rome, while maintaining its objectives and characteristics.
It was officially open on Thursday, 5th of February 2015.
The National University Library of Turin hosted the first leg of the event. Then the work was transferred to Tirana and the exhibition was staged at the National Historical Museum of Albania. Finally, the work returned to Italy and exhibited at the Museum of Old Villa Doria Pamphili in Rome.
This sixth edition of the Biennale is curated by Anselmo Villata and for the Country Guest of Honour, Albania, Alfred Milot Mirashi and it is promoted by the National Institute of Contemporary Art in Italy.
They have printed an edition of a catalog of 160 pages in Italian, Albanian and English language.
The exhibition is under the Patronage of : INAC , National Institute of Contemporary Art ; Ministry of Cultural Heritage and Activities - General Libraries and Cultural Institutes ; Piedmont Region ; Ministry of Culture of Albania ; Embassy of Albania in Italy ; National University Library of Turin ; National Historical Museum of Albania; Museum Villa Vecchia, Villa Doria Pamphili.

• NATIONAL JURIED EXHIBITION
> 2014 - Art exhibitions for the celebration of the 50 years of EKATE,"The Cyprus Chamber of Fine Arts".Limassol – 28 November 2014, 7.30pm at the Lanitis Foundation. Inaugurated by the manager of Cultural Services of the Ministry of Education & Culture, Cyprus.

• NATIONAL JURIED EXHIBITION
> 2014 - Art exhibitions for the celebration of the 50 years of EKATE,"The Cyprus Chamber of Fine Arts".Nicosia – 24 November 2014, 7.30pm at Famagusta Gate. Inaugurated by the mayor of Nicosia, Constandinos Yorkajis.

• NATIONAL JURIED EXHIBITION
> 2014 - Art exhibitions for the celebration of the 50 years of EKATE,"The Cyprus Chamber of Fine Arts".Larnaca – 31 October 2014, 8pm at the National Gallery of Larnaca. Inaugurated by the mayor of Larnaca, Andreas Louroutziatis.

• NATIONAL JURIED EXHIBITION
> 2014 - Art exhibitions for the celebration of the 50 years of EKATE,"The Cyprus Chamber of Fine Arts". Pafos – 11 October 2014, 6pm at the Old Pafos Powerhouse. Inaugurated by the mayor of Pafos, Savvas Vergas.

• INTERNATIONAL JURIED EXHIBITION
> 2013 “Liquid Cities & Temporary Identities | Finland 2013” - International Art Festival of Photography, Video Art and Computer Graphics, Painting and Performing Art will be held in the city of Espoo (Finland), at Espoonsilta Gallery from the 10th June to 16th June 2013.
Thirty-six artists, from different countries around the world, have been selected to be part of this group exhibition. The selection was based on the main concept of hybridization between identities and urban environment, as the result of liquid identities and liquid contacts between people.

• NATIONAL JURIED EXHIBITION
> 2009, “There is always a way around a wall”, project was organized in collaboration with the Goethe-centre, Nicosia Cyprus. 30th November – 14th December, THEARTSPACE, 31 Pigmalionos St, Nicosia Cyprus.

• E.KA.TE The Cyprus Chamber of Fine Arts. E.KA.TE is a member of the International Association of Art (IAA) and represents IAA in Cyprus.
• Visual Artists Association, Cyprus.