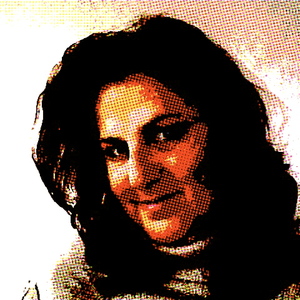 Kathinka Gunn ( artists name GUNN 4 ART) comes from The Netherlands. She developed a love of animals at an early age as she grew up surrounded by horses, dogs and other animals in the Dutch countryside. In her early years, she was deeply involved with horses and after much hard work and persistence became a Dutch Youth Eventing Champion and then a riding instructor. A bit later in life, because of her keen interest in the fine arts, she decided she wanted to pursue the visual arts as a profession. Her first step towards achieving that goal was to attended the oldest academy of fine arts in the Netherlands, The Royal Academy of Fine Arts located in s`Hertogenbosch. In 1983, upon completion of her studies, she said goodbye to both her school years and her beloved countryside and moved to Amsterdam to begin her career as an independent artist. During her Amsterdam years, she was deeply involved in the city's art scene and worked at developing her skills as an artist with the same intensity she had shown in developing her horse riding skills. At the same time, she also took an interest in music and could often be found at the famous Concertgebouw as well as at the Dutch National Opera House mingling behind the scenes with both the local and international music crowd. This resulted in numerous well known singers, musicians and conductors learning of her artistic talents and asking her to realize their portraits. After fourteen years of experiencing life in Amsterdam, she expanded her horizons by spending four years in the north of Germany and some years in the north of France. Then in 2002, she moved with her husband and two sons to the beautiful countryside of the Alsace where she transformed a huge old barn into a spacious studio. In this place she now calls home, surrounded by nature and by her many horses, dogs and cats, it is no surprise that animals have become the main theme in her work. Her passion for nature and animals as a young girl has persisted throughout her life and developed naturally into a source of inspiration and direction for her as an artist.Kathinka Gunn is a varied artist who creates 2-dimensional as well as 3-dimensional art work. Her body of work includes drawings and paintings as well as sculptural creations; creations ranging from mantelpiece size sculptures to large iron and bronze castings. She is perhaps best known for her varied and unusual use of materials, such as iron, wire, lead, fresh cut branches, polyester, rubber … Form, posture, movement and the skin type of the animal that she wants to shape determine the choice of materials. A good knowledge of the anatomy and the general character of the animal to be portrayed is essential and is always the basis for any sculpture. Her work is powerful, ingenious and often spiked with humor. Her individual expressive style has been described as “absurd-realism”. Creations by Kathinka Gunn can be found in museums and private collections in both Europe and the United States.
Awards:
2007 “ Prix Prestige de la Ville de Cernay “ — 24e Salon d`Art “ Chevalet d`Or” ( Cernay)
2009 “ Prix Special du Salon “ — 20e Salon Artistique “ A la Porte du Sundgau” ( Illfurth)
2012 “ Prix Fonderie Rosini “ — 36e Salon National des Artistes Animaliers ( Bry-sur-Marne/ Paris)
2014 “ Prix Arte Contemporain” — 10e Biennale d`Art Animaliers ( Saint-Pierre-Lès-Nemours)
2014 genomineerd voor de “Prix Société Genérale, ArAnimA beste sculptuur — ( Caen)
2015 “ Marco Polo-Art Ambassador International Prize”— ( Venetië)
2016 “ 1e Int.Prize - Leonardo da Vinci-The Universal Artist “ —( Florence)
2016 “ Canaletto Prize” — Biennale Riviera del Brenta ( Mira-Venetië)
2016 “ Shakespeare in Art Award” — Triennale dell Arte Contemporanea ( Verona)
2016 “ Taylor Prix Edouard Marcel Sandoz“ — Salon d`Automne ( Paris )
2017 “ Woman in Art Award”— Woman`s Essence Show —( Paris )
2018 “ Medaille de Bronze” — ART CAPITAL—société des Artistes Français —( Paris)
2018 " Prix Colmont" -- Institut de France--Académie des Beaux-Arts--(Paris)

I like to work with many different kinds of materials, such as iron, bronz, plaster, lead, wood,polyester and rubber... The material choice depends of the feeling I like to create....

“MONUMENT FOR A WARRIOR”