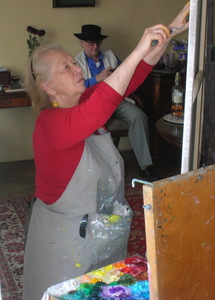 Artist Natalia Bragina
Natalia Bragina was born in Leningrad, USSR (now Saint Petersburg, Russia). She graduated from Moscow State University with a degree in International Economics. She also attended the art studios at Moscow State University and the Moscow House of Scientists. While working at the Institute of Global Economics and International Relations of the Academy of Sciences of the USSR, Natalia Bragina continued with her artwork and painting. In 1989 painting became her main professional occupation. Since then she has had no fewer than fifteen personal exhibitions.
Natalia Bragina`s paintings are acquired by many Russian and foreign art collectors. Her artwork has been reproduced in numerous art magazines. Her paintings are presented in public galleries of Moscow and other cities of Russia.
E-mail: brakobra@mail.ru

Here are presented (mostly) the recent works. As one can see, they are done in a figurative manner. What about their quality, it`s for others to judge.

“Still-life at the window sill, pastel on the cardboard, 2015”