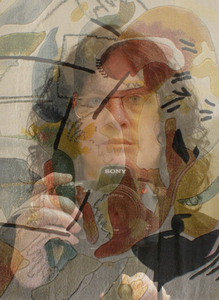 Eva-Marie Hild (from Austria/Europe) is an educated Physician, specialized in psychosomatics, Psychotherapist for KIP, an Art Photographer and has a BA in Theater-, Film- and Mediastudies.
Painting with the camera and telling a story has always been her vision which is: "Sight is characterized by our awareness and the created perception," She has learned from the cinematographer, abstract painter and former teacher at the University of Applied Arts Vienna, Kurt Jetmar, since she could walk and talk. In Summer of 2009, she had been encouraged by Robert Redford and his team in performing her skill and becoming an independent Art Photographer. So she did and made an education in Art Photography from 2009-2013 and studied from 2013-2017 Theater-Film and Mediastudies at the University of Vienna and the University of Applied Arts Vienna and got her BA at the 03/07/2017. As a Visual Artist, she is a member of International Association of Art, Bildrecht, and a supporting member of Sundance Institute.
She participated succesfully at the largest world art photo contests by far, like Trierenberg Supercircuit, participated by invitation at two Sundance Sreenwriters Workshops 2015. She participated in exhibitions including artist in residence in Arbil/Kurdistan 2013. As a finalist of the Artavita Contest 2015/2016 she participated at the Art Basel/Art Miami 2015/2016 and at New York Expo Art Fair 2016.
2018 Artist in Residence in frame of the ICCA Festival in Trujillo/Peru (Voice of God)

Artist Statement: For Eva-Marie Hild it is all about appropriation. Her pictures are generated by elements which already exist within the public space which surrounds her and which she is aware of. This awareness; her individual perception of space is, what makes each picture her own. The overlapping layers in her photographs represent the amalgamation of that which already existed and which was interpreted. Because of the awareness she creates about it, it becomes her own. As a consequence Hild sees her work as a densification of the inner and the outer space