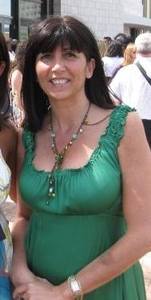 Adelia Gonzalez was born in Buenos Aires, Argentina, lived in Bolivia for two years as a teenager and moved to the Unites States in 1997. With her Bachelor in Pre-School Education from Santa Ana Institute in Buenos Aires, Adelia discovered her love for the Arts but did not start her formal training until she moved to South Florida where she earned her Bachelor degree of Fine Arts with a Painting Major from Florida Atlantic University.

She attended several workshops at the Boca Raton Museum with great artists such as Roslyn Kirsch, Eydi Lampasona, Larry Gerber, Clive King and Niles Laventhall among others.

When the transition from being a teacher to being a full time artist was almost completed, in December 2008, a brain stroke changed Adelia’s life forever. Always right handed, she learned to paint with her left hand and making a complete transformation in her techniques, including her signature and in her way of seeing life as an artist and as a person.

Adelia moved to Toronto, Ontario in Canada in 2012 where she continues painting in her studio at home.

The Turchin Center for the Visual Arts
Boone, NC (2006)

Throughout my early life, my right hand was the tool which I relied upon to do the most basic and complicated of my everyday tasks. Before my accident (stroke), it was my right hand with which I expressed myself in my Art. Not only was I forever changed following the stroke, so was my ability to create Art. I found myself having to rethink my whole reality at the most basic of levels. It forced me to view my life in a different light. With the loss of the main tool that I used to communicate, I thought my artistic career was over...

That was until a special person came into my life, Alex Voorn. He is a great artist, and now a great friend as well, who helped me redirect the approach I took with my work. He taught me how to use my left hand with confidence. From that moment on, I began to explore my new artistic universe from a totally different perspective.

Being scared was no longer an option. I embraced the frustration that I had with my communication deficits and rechanneled onto my work in a new way. New techniques, materials, colors, textures and even working at a much larger scale, helped to reshape my art and gave it new meaning.

As painful as it was, I choose not to forget my past. Instead, I choose to internalize the psychological aspects of my accident and recover, in turn, enriching and reshaping my creations.