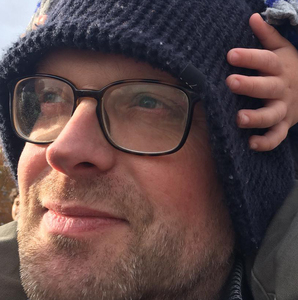 René van der Klooster is multifaceted. Besides an author of poetry and plays (in Dutch and English) and prose (in Dutch), he practices visual arts, including drawing, painting and sculpting, moreover, formerly he worked as an architect and in that capacity he is currently designing lamps. The writing and the arts mainly originate from a vast dream world, a certain grip on the subconsciousness and frequent mystical experiences.

In 2017 he was with nine art works a participant of the exhibition Beeldenstorm in the Abbey of Middelburg in the Netherlands.

The methods and technics that are used in general, in the following steps: linden wood or plywood as the canvas / transference of the design onto the wood or it is directly drawn or painted onto the wood / carving the wood with a knife, chisels or electric tools / finishing it with additional techniques and materials: oil paint, industrial paint, acrylic paint; sand in oil paint carefully arranged; 2d print technique: transferring shades from a plastic sheet onto the wood using heat; 3d print technique: perforated stickers or cloth covered with oil paint, afterwards the sticker or the cloth will be removed leaving a 3d pattern; putty, filler, plaster, coloured plaster; gold leaf, copper leaf; pen, pencil, charcoal, felt pen, ink; inlay (different materials); pour on varnish, a varnish which is 40x thicker than normal varnish.

Spontaneous subject that appeared while making a drawing directly onto the wooden panel.

Based on a dream, possibly in connection with the following text by William Blake from The Marriage of Heaven and Hell: around were numbers of Eagle like men, who built places in the immense cliffs… and/or in connection with the meaning The Native Americans assign to the eagle as a symbol of The Great Spirit.

“The Window on the Horizon”

The old woman represents mortality, the window opened on the horizon represents death and beyond.

The left part is an allegory of the psychic monism placed, like a Trojan Horse, within the dogmatism of monotheism.

The center part is an allegory of the energetic monism placed, like a Trojan Horse, within the dogmatism of polytheism (or rather henotheism).

The right part is an allegory of the psychic energetic monism placed, like a Trojan Horse, within the dogmatism of monism.

(psychic monism: merging of the psyche of everyone into one psyche (western notion of oneness))

(energetic monism: merging of the energy of everyone into one energy (eastern notion of oneness))

(psychic energetic monism: combination of both principles, merging of the eastern and western notions)

Loosely based on the short story by Franz Kafka 'Vor dem Gesetz' (Before the Law).