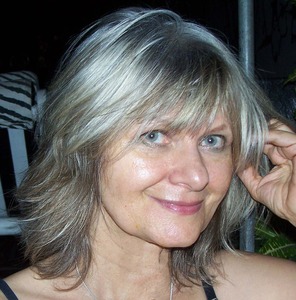 Grazyna Adamska-Jarecka is a Polish-Canadian artist whose work is abstract or figurative that addresses depression from a female perspective. Using the human figure, she explores the aesthetics of disengagement and coping behaviours developed in childhood. Her subjects are wounded, maladapted women seeking comfort. The transparent materials stress the subjects' alienation from society and act as a metaphor for their desired state of clarity. Adamska-Jarecka received her MFA in painting from Indiana University of Pennsylvania (2006) and Honors BA in studio art from University of Guelph (2002). Over the past ten years her work has been exhibited in Canada, the US and Brazil and Mexico. In 2010 she received the Au Naturel Solo Show Award (Astoria, USA) and her work appeared in The Los Angeles Art Show, The Rockford Midwestern Biennial, United in Art (San Paolo) and Women’s Vision (New York).She received International award of Lorenzo Medici at 2011 Florence Biennale and is a juried winner of Artslant 2011 showcase in category of drawing.Adamska-Jarecka is presented by WMG (Chicago) and Ward–Nasse Gallery (New York). She lives in Guelph, Canada.

The portfolio” Becoming Transparent” proposes a new way of thinking about the old theme of melancholia in art, considering the contemporary aesthetics of disengagement and mental trauma. The subjects in my work are self-absorbed, split in self-seeing, the mind arrested in delusions, alienated, rejected and wounded. These subjects face the anguish of the mind that spreads throughout the body, leading to disconnection and isolation. The figures often seem to be monolithic, inert but are also dynamic through bursts of emotion.
As a scientist on one hand and mental/emotional exhibitionist on the other, my goal is to communicate my observations on the internal workings of the mind through enactments. This articulation allows me not only to state the facts, but to confess, to become less obscure, to become transparent in order to self-heal. Addressing depression from an artistic standpoint and using the human figure as a symbol, my work is informed by new research in cognitive and behavioral science, as well as by contemporary feminist theory and critical strategies in the field of woman’s subjectivity.

“Hugging Pillow in the Air of Ice by Adamska-jarecka”

“Immitation of Freedom by Adamska-Jarecka”

“Break From Self-Creation by Adamska-Jarecka”

“I do not belong to here anymore by AdamskaJarecka”

“Child within me by Adamska-Jarecka”

I am interested in the qualities of the material I use. The paintings are executed on sheets of plastic. Covering the transparent film with the paint and scratching it toward transparency, stands for the interplay between light and the opacity, the real and the illusive, the chance and the consistency. Things are not left to chance, nor held to process. Consistent is always an impulse or an idea that stays with a painting and drives it, from its beginning to the end. This is the type of concept that makes my attempt toward minimal expression my own simple and meditative art. The work indicates three paths I am working along, one path of transparency, one of color rather no color and one of pattern. The work reveals that these three paths converge in advantageous way and often seem to be inseparable.

“Grace in Droplets by Adamska-Jarecka”