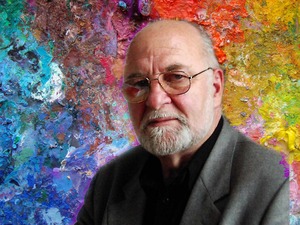 PETAR DJORDJEVIC was born in Pirot, in southern Serbia, in 1943.He finished Art school in Nis in 1963. In 1969, he graduated from the Belgrade Academy of Fine Arts. He has been a member of ULUS( Artists´ Association of Serbia ) since 1970. He was living in Paris between 1972 and 1975. In 1973 he held an exhibition at the Salon de Paris with Picasso.

The very title of the Djordjevic´s latest collection – The History of Art in Negatives – indicates that the artist has touched a very specific artistic issue, wider and deeper than the question of pure artistry and different from postmodernist ideology of claiming the past. He has chosen several great ( if not the greatest ) masters of art, spiritualists and creators of the great European tradition ( from Leonardo, Michelangelo, Botticelli, through Vermeer, Velasquez and Delacroix to certain representatives of impressionism and surrealism ) and thus surrendered himself to the magical influence of their art, not as a passive admirer but as a woken artistic self conscience supported by the experience of modern and postmodern artistic practice. It appears that this contact initiated a miraculously fruitful creation process of personal artistic vision of Petar Djordjevic which touched some secret and lasting coordinate of a great system of the classic artistic language.

Every painting consists of three temporal dimensions - of three levels followed by three adequate formal linguistic expressions: the first dimension represents the time when the painting was made; the second dimension represents the reflection of time to which the painting is directed by the presence of a beholder ( a typical representative of the present time ) ; the third dimension belongs to the authors whom Petar Djordjevic addresses – to the grand masters of the European art whose significance displays itself as an illuminated arch connecting the past and the future.

“A scene at the foot of Montmartre”

“The big exchange: All Milosevic´s victories”

“In praise of a hand”

“In Honour of Velasquez”

“The Hat of Mr Manet”