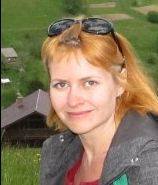 ‘What would you do if you were not a software developer?’
‘A would be an artist’

Viktoriya Tudoran was born in Ukraine in 1980 in an industrial city Mykolayiv. She has been interested in drawing since childhood, but the social environment where she grew up made her understand very early that being an artist was not a good choice to earn money. Therefore, she forgot about drawing for over 20 years.
In 2003 Viktoriya received a master’s degree in computer science graduating from the National University of Shipbuilding (Ukraine). She has worked in this branch ever since.
In 2015, being a university lecturer, Viktoriya published a student book titled ‘Human Computer Interaction’ The book is still recommended by the Ukrainian Ministry of Science as an official student book for all Ukrainian universities. The book contains a lot of information on processing visual data by human brain.
The same year Viktoriya and her husband moved to Poland. As it was time of change in many fields of her life, she also got back to her childhood interest and started to learn drawing basics from books.
Initially, sketching was just a tool to improve drawing techniques, but soon it became a passion.
Today Viktoriya holds a position of Senior Web Software Engineer in an international company. She conducts trainings ‘Sketch Your Speech’ on use of drawing as visual aids in public speaking. Her sketches have reached the finals of several online contests in Europe and the USA and have been exhibited together with professional artists’ works.