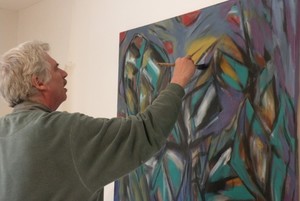 Born in Ottawa in 1947, Simpson’s work has been exhibited in museums and galleries in Canada, the U.S., France, England, Italy, Austria, Switzerland, Spain, Portugal, Malaysia, and South America. His works are included in over 100 private and public international collections. He has been included in several major art history books, survey shows and academic studies around the world.

Simpson works in the tradition of abstract surrealism, producing canvases, drawings, mixed media and photography. His exhibition in a castle in Tuscany was the subject of a BRAVO TV documentary, broadcast across Canada in 2003, entitled A New Arcadia, The Art of Gregg Simpson, which can be seen at www.greggsimpson.com From 2015 to 2018, Simpson has exhibited in New York, Rome, Paris, Milan, Berlin and Venice in solo and group exhibitions.

Landscapes made from a combination of imagery from the artist's west coast environment and
the influence of the south of France where he frequently works and exhibits.

Only prints available of this work.

Works which incorporate surrealistic elements from the human figure to abstracted totemic forms.

"My work is on the border between abstraction and surrealism, formal design and automatism. I continue to use mark making as my basic tool, as a technique to liberbate the mind and evoke universal archetypes.

I begin a work very spontaneously, often with the canvas lying on the ground and soaked with water to make the colours flow. Then I proceed through a series of re-drawing, shape making, and building layers, using the inner eye to determine a final result, which may, or may not, correspond to something in nature. These paintings are improvised to a great degree. The final result is a network of forms made directly from the application of paint, or if I use acrylic, its removal using a garden hose.

These may evolve into a lyrical, atmospheric work, or one where formal structures of design suggest the figure, the landscape, or even still life, but re-interpreted into a purely imaginative realm, a personal, yet universal, world of forms whose meaning changes with each viewer."

“Impressions of the Fontainebleau Forest”

A series done at Rouges-en-Verts, studio/gallery in the Perche region of Normandy