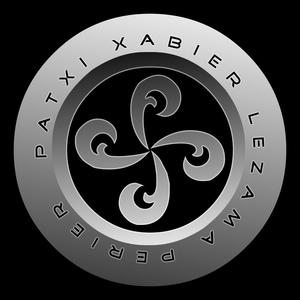 Patxi Xabier Lezama Perier sculptor and writer born in Zalla in 1967. A town known for especially for its mythology where superstitions were widespread in malignant supernatural beings, sorcerers and witchcraft, so the natives of Zalla are called by warlock. The primal basic matrix vibrated in the most intimate entrails of this artist who has been trying for many years to make known Basque mythology through his sculptures of iron, stone and wood, transmitting and solving, as well as providing semblance to this type of subversive imaginary Underground world, assuming systems of values that go beyond the visual, from a historical and cultural perspective of an ancient mythology inherited from the past that transmits to future generations.

Basque mythology is the set of myths of the original population of Euskal Herria. The intangible heritage of history and the Basque language. Euskera maintains a language that is not related to any of those that surround it and is estimated before the entry of Indo-European peoples. Among the various hypotheses about the origin of the Basques, one of them says permanence, at least from the Neolithic period, in the territory they occupy. The historical and cultural perspective of the oldest people in Europe, in a set of sculptures that look to their roots looking for the keys to their own identity.

​It is a feminine numen as an elegant and wonderful lady, endowed with a mysterious and fascinating power, which in turn is idyllic inspiration. It is the most important genius of Basque mythology, being a mythological character Tectonic lives underground, and comes to the surface by caves and chasms. Most of the time shown in the form of a beautiful woman, personifies the forces of nature, and with his power, gives balance to them. It is the female personification of the earth, Queen of Nature and all its components. As goddess has the ability to impose justice, severely punishing the men who act wickedly defender honesty and severe injustice. Among its missions is to punish the lying, stealing, pride, not fulfill his word, not respect people and arrogance, however rewards to help others, succor their followers but punishes those who do not believe in her.

The ​Basque Etxe, from the point of view of the Basque symbolic anthropology is like the house or village, reconstituted the cave of the Goddess Mari, whose representation was the etxekoandre or lady of the house. Basque etxe is radical, elemental and absolutely matriarchal-female, as it is both time and space of communion of the living and dead, dwelling and burial, temple and cemetery and place of life (procreation and birth) and death (death, burial and remembrance).

Etxekoandre is the reflection of Mari, his symbolic incarnation and the mother soul of the house, his representative at home and chief minister of domestic worship, presides over the acts of remembrance of the dead preaching the naturalistic ethics of Mari's religion.

Adur is luck or trend that designates the power to do things at a distance, mainly own witches and wizards. Humans also have and serves to dominate mythological beings.

​Tartalo represents an anthropomorphic gigantic Cyclop, with one eye in the middle of the forehead with cannibalistic habits and terrifying behavior. It is perverse, wild instincts and very aggressive. It feeds on sheep, children and even adults occasionally. He lives in the mountains and its size is huge as it is his strength.

Troglodytes divinity's that takes the form of bull or cow.

Basajaun is Lord of the Forest, a character of Basque mythology of prodigious size and strength, that the first inhabitants of those lands found inhabiting the most remote mountains and forests. Is credited with the responsibility to transmit to humans the secrets of agriculture (for example, the cultivation of wheat), manufacture and use of tools such as the saw and mill or ironwork.

The concept of sister is very common, allowing the multiplication of the personality of mythological figures.

Divinity that often takes the form of a horse.

The Evil spirit in the Christian sense; genius hijacker souls who takes many forms.

Ghost of Basque mythology, which he is responsible for causing diseases whose natural causes are ignored humans. It is something like making or figure fog nebula. It is a spirit whose figure is vague and indefinite, perhaps an animistic projection fog or the air itself. This genius most of the time is negative and dulls human actions, but at times we can help.