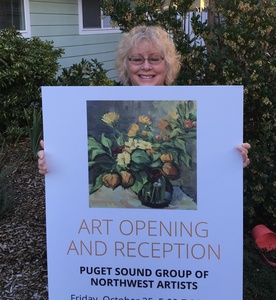 Jolyn Wells-Moran is a plein air and studio painter who loves landscape and still life painting in oils and acrylics. She studied at the Institute for American Universities, School of Drawing and Painting, Aix-en-Provence, France; Gage Academy of Fine Art , Seattle, WA; and with many well-known masters. She has shown her work in galleries and other juried venues for the past 10 years, winning awards and certificates.

She completed college art courses in Design, several in Painting, Drawing and Art History. She taught drawing and watercolor courses for a community college in her twenties. In 2004, she began painting in oils and attended the Marchutz School of Drawing and Painting, Institute for American Universities, Aix-en-Provence, France, in 2004. Her instructors since then have included such teaching artists as Michael Situ, Kathryn Stats, Eric Jacobsen, Mitch Albala, Jim Lamb and others. She studied more recently with Slava Koralenkov, Russian impressionist, Kathryn Townsend and Jill Carver.

Wells-Moran has shown in many juried shows, including; those run by the California Art Club, the annual PAWA juried show at the American Art Co. in Tacoma, the Port Angeles Center for the Arts’ Plein Air Competition, the Kitsap Arts Festival, the Magnolia Arts Festival, the Shoreline Arts Festival, the Edmonds Arts Festival and galleries in the Pacific Northwest and Mexico. Her work has been presented in six solo shows in Seattle, including ArtsWest in West Seattle and she has won awards in several local, national and international exhibitions.

She is a Signature Member and President of the Puget Sound Group of Northwest Artists (PSGNA) – a professional artists’ juried group operating since 1928 -- Women Artists of the West (WAOW), and Plein Air Washington Artists (PAWA).

Here are some of my paintings from the year of COVID.

This one of the memorable mountains in northern Washington, Here, I've painted it at the end of the ridge which is partly in shadow.

Each artist paints at least a little differently than others. Nowhere else in the world of art is that more clear than when comparing the ways a rose has been painted.

Winter sunsets in the Pacific northwest can be stunning. This one spilled its apricot syrup all over the beach grasses.

My still is more expressive with still life painting.

...is the mountain that isn't, for the most part. This volcano blew in the early eighties, but the old highway outlook still provides a wide valley view and sky typical in spring.

Waterfalls can also be found underground. This one is just a foot or so down. I love painting natural vignettes like this one.

What an impressive mountain range, maybe especially when covered in tons of snow and ice.This painting two feet by three feet, larger than I usually paint, but the subject called for it.