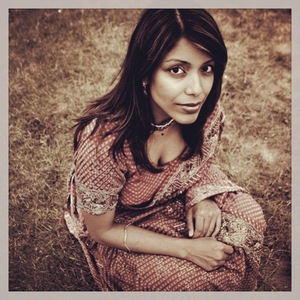 Bula Barua is an award-winning, internationally acclaimed fine artist and a published author and poet. She was raised in the USA by immigrant parents from Assam, India. Bula primarily works with acrylics and oils on canvas, paper, and aluminum. Her works are included in many private and public collections around the world. Bula has won several global and national awards for her ability to capture and communicate emotion and aesthetics through her beautiful artworks.

Bula spent many of her childhood summers in Assam, sauntering through tea gardens, sketching, and journaling. As a young adult, Bula divided her time between performing in plays and musicals, as well as sketching, acrylic painting, writing, and listening to pop music. Her influences, which range from Lata Mangeshkar and Ravi Shankar... to the paintings of Van Gogh, Renoir, and Picasso... to 19th Century English literature and popular teenage fiction... to Immigrant Culture, Greek Mythology and Astronomy... eventually inspired her to create a style distinctly her own.

In the early part of her artistic career, Bula spent much time experimenting with new painting techniques, in an effort to gain mass, volume, unity and form. She began to contour her figures with a long brushstroke that followed but did not emphasize the outlines. Today, Bula is particularly noted as a modern artist for her ability to express an idea with a minimum of effort and economy of touch. Her subject matter is often the intimate world of a sensitive woman who discovered poetry in the simplest acts and gestures, and her delicate, subtle works have been constantly shown with those of the other surrealists, as well as at many official Salons.

In June of 2011, Bula wrote her first book of short stories, poems, unsent letters, and confessions, within a 24-hour time span. She titled the book, “Sand Nigga” after the lead story, created in memory of a prophetic teenage experience where she was inaccurately labeled as “Arab” and then expected to uphold the same superficial traditions of hatred towards others. As an Assamese woman, to boldly speak out about her own cultural experiences, and stand up against the idea that we are merely bodies to judge, was monumental. Thus, the book sold many copies worldwide and garnered much attention and admiration from readers and critics alike. “Sand Nigga” also contains renditions of Bula’s paintings from her first exhibit “Wo.Man,” named after the first poem in her book.

Since then, Bula has had the honor of exhibiting in Los Angeles, New York, Taiwan, Siberia, Assam, Miami, and more. She was an Ambassador for Taiwan’s “Say No to Drugs” program, and spends much of her time creating art for underprivileged youth. Bula is not just a Fine Artist, but she is a Humanitarian who is trying to change the world for the better.

In addition to creating art, Bula is also a Usability Expert, helping to make user interfaces for mobile and web applications more aesthetic, efficient and user-friendly. She spends her time in Miami and Los Angeles.