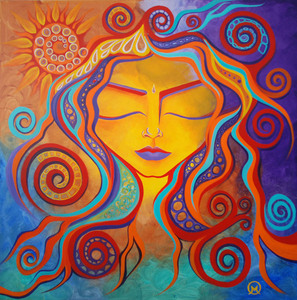 Michelle Oravitz is an award-winning artist based in Miami, Florida. She grew up in New York, where she first studied painting. She received a B.A. in Architecture from Philadelphia University in 1997, and then went on to study ayurvedic medicine, yoga, and meditation. These complex interests have inspired her paintings.

Michelle's art has been published in magazines, calendars, a Harper Design book, CD covers, and was the subject of a television interview on South Florida Today. Her painting, "The Prayer" was featured on the set of a major motion picture, "The Unborn," in 2009. Her work has also been exhibited in galleries and other venues in New York and Florida, including The Art Place Wynwood's 1st Annual Juried Painting Show in Wynwood, and the Femme Art Exhibit during Art Basel, Miami.

Michelle's art reflects her desire to connect with the mystery of human consciousness. She is naturally spiritual and wants to evoke a feeling of timelessness and depth that will bring about a higher state of consciousness for the viewer.

“I Heard a Whisper”

“Waiting on a Dream”